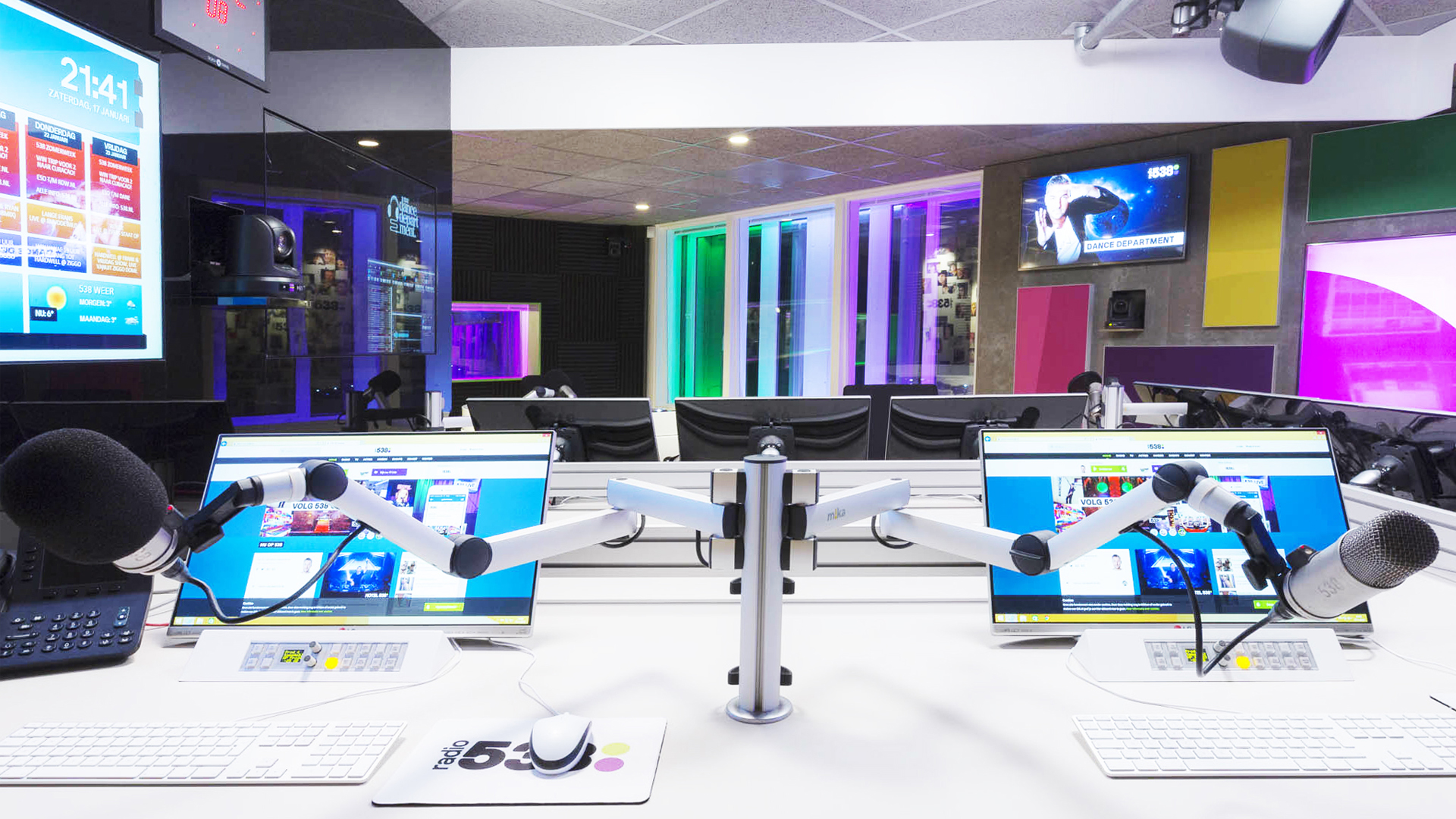 The studios of Talpa's well-known radio stations are equipped with IHSE KVM hardware by Intronics. The radio stations of Radio 538, Skyradio, Radio Veronica and Radio 10 can easily switch between systems. This offers even more flexibility during the various broadcasts.

Talpa’s home is the broadcast and media city of Hilversum in North Holland. Its growing presence in the Netherlands, coupled with a philosophy to spearhead radio and online broadcasting, means Talpa is continually expanding and developing new entertainment concepts and ideas. The company cannot stand still, it needs to keep up with modern trends, listeners’ needs and the ever-changing music scene. Talpa has to be responsive and highly versatile in an extremely competitive and modern radio broadcast market – one that is in a rapid state of evolution itself.

When Talpa took the decision to rebuild and extend its main transmission complex, the company committed to invest in the best available technology that would give its production and engineering staff the highest degree of flexibility to prepare and present radio programmes. In addition to aiding future growth plans and helping to maintain its leading position in the industry, the proposed new facility would guarantee round-the-clock transmission of services

A specification for flexibility and versatility

The plan conceived by the project team at Talpa, led by Jaap van de Steeg, and developed in conjunction with Thomas Rouw, business development manager for the Netherlands IHSE dealer, was to create six individual broadcast studios. Four of these studios were to be directly assigned to the stations broadcasting from the facility and two were to remain as backup studios for use should one of the main studios fail.
Presenters and producers using a studio would be connected to all the remote computers they need to access for that programme transmission. To provide flexibility and instant changeover between programmes the system specification included a switch to allow instant changeover of source computers to the presenter and producer desks.
A further level of flexibility and functionality was suggested by interconnecting all studios together at a central point in the CAR. This would allow any studio workstation to be connected to any source computer, in effect enabling complete freedom of studio selection for any programme. Whilst each studio is assigned to a specific station and able to operate autonomously, this additional connectivity provides a heightened degree of backup across studios and allows future adaptation as the business evolves.
Fifteen other recording studios, edit suites and news rooms were also created and these too, were required to be connected into the system so that the news production staff and content editors would have flexible access to content and production tools.

Further, the Talpa engineers wanted the system to be as simple as possible to control and manage; with minimal re-configuration between programmes and instant switch-over for recovery and crisis management – in the unlikely event that something should ever happen to disrupt the continuous flow of music and entertainment.
The objective was set to ensure that whatever happened, the mood managers at Talpa would continue to reach the hearts and souls of their millions of listeners and enrich their lives.

The main concept in creating the new studio was to locate all computer-based broadcast devices in a central apparatus room (CAR) with individual direct connections to user workstations; each consisting of a vanilla computer keyboard, video screen and mouse.

Rather than installing fixed connections between device and workstations, all the source devices and workstations for an individual studio are connected to their own dedicated KVM matrix switch, giving presenters direct access to the broadcast devices used on that channel. This configuration allows each studio to be operated in isolation if necessary.
Changing between programmes requires a straightforward reconfiguration of connections from workstations to sources. A process that is simple enough to achieve by changing the switch settings using the small touch panels located next to the main mixing consoles in the studios.
To achieve the additional connectivity between studios, the KVM matrix switches are interlinked through individual Matrix Grid connections. Matrix Grid is a highly effective method of connecting multiple switches together to form one, much larger switch, allowing any user to access any source device, no matter where it is on the network and to which switch it is connected.

A presenter or producer in any studio can access a pre-defined array of devices in the building – giving them freedom of selection and allowing any studio to be used for any channel or programme, satisfying the requirement for full backup capability.

The system design went a step further, linking in secondary areas such as the main control room, news booths and engineering desks. These areas could, if the situation arose, even be used by presenters to host live programmes.

Radio studios need to offer convenience and connectivity to visitors as well as staff. A guest arriving to be interviewed will often bring their own laptop or smart device containing their own notes or music. Or there may be a need to temporarily connect an audio recorder to play out a soundtrack or sound-bite from a mobile device. Both these requirements are accommodated through a bank of USB ports within the studios, allowing these devices to be integrated into the system and made available for broadcast only by connecting a USB cable.

Fully integrated into the broadcast environment

The Draco tera KVM switches, made by leading German manufacturer IHSE possess significant functionality. In addition to their main tasks of switching and extending computer signals, Talpa engineers can replicate and monitor all devices whilst they are in use. This allows them to check, and even take control of, remote devices. And they can do so from their desks, outside the studio. The engineering team are able to ensure that all transmissions adhere to strict broadcast standards without needing to interrupt the presenters or producers in the studios or interfere in the broadcast workflow.

Convergence of audio and video broadcasting

As radio broadcasting evolves through the years it is adopting new ideas, such as video-enabled radio broadcasting. This calls for the integration of video tools that originated in world of TV broadcast – most of which are based on video standards that are different to those used in the audio or computer domains.
Handling this variety of video formats presents no problem to the KVM-based distribution infrastructure. The Talpa infrastructure includes a bank of SDI output cards enabling computer sources to be distributed through the facility’s SDI infrastructure. This simplifies signal switching and distribution around the building and reduces the need for extra conversion devices.

Transmitting a bouquet of exciting and dynamic radio programmes is simplified by the enormous flexibility offered by the IHSE KVM system. On a day-to-day basis each studio is re-configured to suit a scheduled programme as it prepares for broadcast. An engineer simply selects a pre-stored configuration layout using a dedicated touch panel that was designed and built by the in-house engineering team. The KVM switch does the rest – making the correct connections between the presenters’ workstations and the appropriate source devices.
Engineers are able to monitor every device from their main control room and ensure programmes are broadcast correctly. They can make fine adjustments to any of the transmitted audio signals from their own workstations without having to move around the building, which delivers a high level of convenience and efficiency.

Designed with a view to the future

Throughout the process, the engineering team at Talpa worked on the assumption that the facility would grow and evolve in the future. The system design accommodates this principle: spare switch ports are available, additional wiring was laid throughout the building and new switches can be easily connected to the network using Matrix Grid. Setting up a new studio in the future will be a simple task of connecting basic workstation terminals through cables to the equipment room to a new KVM switch linked to the appropriate broadcast devices in the racks.
As new broadcast systems become available in the future, they can be incorporated into the layout. IHSE follows a strategy of developing new interface modules for the matrix switches, as and when, they are introduced. So future devices that employ audio and video standards unknown to us today will be integrated into the overall studio complex.

Our KVM team is focused on the professional audio/video and command and control (KVM) market. Through years of experience in the professional AV and KVM world, Intronics thinks in solutions, not in products. We know the market, give independent advice, deliver different KVM solutions. These solutions are tested in our own fully equipped test lab.

Our KVM professionals will be pleased to help you

We are in direct contact with our manufacturers. Let us know if you need additional information or help in choosing a suitable solution.
Feel free to contact us for more information:
E-mail: info@intronics.es
Teléfono: +34 952 245 557 - 902 44 88 01
CONTACT US